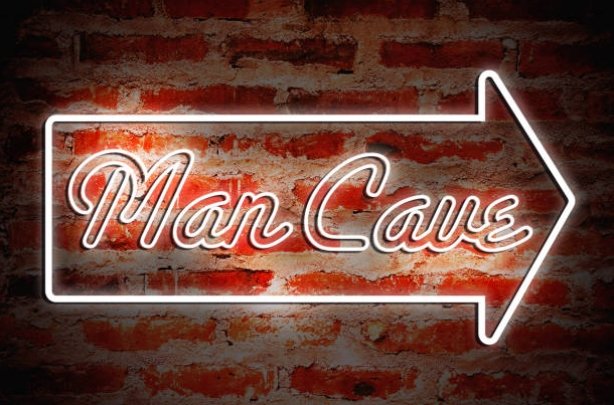 The term “man cave” is a metaphor describing a bonus room inside the house where guys can do as they please without fear of upsetting any female sensibility about home decor or design. A man cave ideas and designs are unlimited! They can be a specially equipped garage, spare bedroom, media room, den, or new room addition.

There are certain common areas in homes which are people typically associate with male-oriented chores. Areas such as garages and work sheds are great examples. So men are remodeling these areas into man caves. Garages are typically a man space since they’re often lit by “harsh fluorescent bulbs” and lack heat or air conditioning. So therefore most women tend to refrain from spending too much time in such areas. But nevertheless present a guy with a place to disappear for hours while remaining in the house.

A wife may have substantial authority over a whole house in terms of design and decoration, but she generally has little say about what is inside a man’s personal space. While many accept that a woman has input on the decoration of the rest of the house, a guy has his own place where “a man can be a man” either by himself or while reveling with his friends in all his rowdy and robust glory. Thus it’s strong appeal to guys!

For example, the man cave interior design ideas in the above image is custom built ready to entertain with a home theater and pool table just a few steps from the wine cellar and bar. The term “cave” truly doesn’t do justice to this expansive and luxurious space. The large, open-concept man cave game room features a sunken screening area with eight leather theater-style seats, a billiard table and well-appointed bar with adjacent wine cellar. Warm, earthy colors and rustic touches like exposed beams and a richly stained bead board ceiling give the room a decidedly masculine feel.

A man cave may also feature a bar and sports memorabilia such as trophies. The possibilities are endless! One man redecorated the space to look like a replica model of the bridge of the Starship Enterprise from the TV show Star Trek.

Upscale sports-themed furnishings are also available to outfit a man cave design. Men often decorate these rooms themselves with little or no female influence. A big screen television is useful for watching sports games with buddies. Since it is usually an area set away from the primary living space, it’s then possible to make noise, or yell at the television, without fear of reprisals from a wife, girlfriend or mother.

Maybe you want to have a man cave yourself yet you are concerned if you can afford this dream project. You work hard. You give much. If you don’t do this now, when will you?

With over 26 years of experience (since the early 1990’s), Mark Gieselmann and his team at HK Construction can provide first class service to make your man cave dreams come true. Start your dream today by calling 858-748-6580 for a risk-free quote.


Did you find what you are looking for? Whether “yes” or “no” that’s great either way because then we have a chance to serve you! So please contact us with your questions. Or even if you want a free quote on home remodeling services. We’re always happy to help!

Serving all of San Diego and North San Diego County.